Let’s be honest here: we wouldn’t be talking about a macabre 25 year-old skeleton-tattooed performer if it weren’t for a certain music video from one the most significant cultural icons of our time. In Lady Gaga’s recent Madonna homage Born This Way, the mama monster of corporate radio gives birth to an evilish Rick Genest, also known by his stage name Rico The Zombie. In one scene, she dances alongside her new boy-toy, sporting make-up mimicking Genest’s real life face and skull ink. The video to this eurodance fable of self-acceptance premiered with great anticipation on February 28th, after which the single became Billboard’s 1000th #1 hit. And Lady Gaga brought Genest along for the ride, giving a whole new meaning to Andy Warhol’s “15 minutes of fame” – online, on TV and in newspapers, Rico The Zombie has become the object of a very unique blend of attention, rumours, envy and full-on admiration.

For this issue’s exclusive cover story, NIGHTLIFE.ca sat down with Rico in a Montreal studio to get the lowdown on the most bizarre winter of his life.

Plucked from obscurity
International media and the fashion press have been quick to frame the story as some kind of fairy tale: last December, Gaga stylist Nicola Formichetti stumbles upon Rico’s fan page and contacts him on Facebook to shoot the first images for his menswear collection as the newly-appointed creative director of legendary Paris-based house Mugler. Genest is evasive on the extraordinary circumstances that brought him to become the new face of a rejuvenated French fashion company. Formichetti and his team come to Montreal in January to shoot Rico; fashion agency TRUSST are in charge of the production. The two founders of TRUSST, Melissa Matos and Andrew Ly, had previously worked with Rico on a local shoot, meeting him through nightlife owl Gibran Ramos.

After the Mugler shoot, Formichetti requests to have Rico fly to Paris to walk the menswear show on January 19th. There is a slight setback: Genest has no passport and is bogged down by fines to his name totalling well over $10,000 in many Canadian provinces. Formichetti agrees to cover the necessary expenses: he basically makes him a free man. To fast-track the process, Genest and TRUSST hire an immigration lawyer who subsequently becomes his manager. On January 19th, Chateauguay-raised Rick Genest stars in his first ever Paris fashion show. His tattoos, the very reason why he was thrust into the limelight, were paid for with money he scraped together by washing cars. Weeks later, he shares the stage with Lady Gaga for the womenswear Mugler show, after meeting her in New York on the set of the Born This Way video.

“My friends think I’m rich now,” says Genest with a smirk. But that’s not the case. Colin Singer, the manager who stood by him through this twist of fate, wants to help his protégé capitalize on the media frenzy; he says a film project is in the works. Days after the NIGHTLIFE.ca shoot, the two fly to Budapest for another contract. Genest may also appear on stage at the Bell Centre when Lady Gaga stops in town on April 25th.

Everyday normal guy
Rico still shares an apartment with friends in a loft near the train tracks in Saint-Henri. “You can jam all night long, there are no chances that the cops might come. And somebody in the block is having a party every night. On weekends, you can jump from apartment to apartment. It’s pretty cool.”

Rico The Zombie isn’t as soulless as his name and multiple deathly tattoos (which include a nuclear danger sign and critters) would lead you to believe. The guy is lively, in both a naive and wise way, with a glimmer in his eyes and a surprisingly handsome smile. He talks in an assertive yet respectful manner, and his soft-spoken tone is indicative of someone who has seen his fair share of pavement and sidewalks as a street punk. He’s also more at ease answering questions in English than in French. In person, the tattoos make it harder to figure whether Rico is short and muscular or just lean, almost frail. He’s not tall; his body seems like it’s not fully grown. When I ask him about tolerating pain each time he gets a new tattoo, he says: “It takes a lot of practice. It finds me. It comes with the job.”

The ‘job’ is also Rico’s passion for gore performance art. After a string of terse answers to my questions about his newfound fame, his face lights up when I mention his carnival project. “We are Lucifer’s Blasphemous Mad Macabre Torture Carnival. We've got a zombie, an executioner, an auto-mutilator. We’re working alongside two really hot chicks called Bella Obscura. They’re gonna do a lap dance for my buddy Caleb! Beautiful women and people being tortured at the same time. It’s just a very contrasted, hellish show.” The troupe should technically be performing at Toronto venue Mitzy’s Sister on April 9th, but Rico might have an engagement somewhere else in the world. Last month, he had to pull out of his crew’s ninja-themed performance in Montreal when his presence was requested in Budapest. 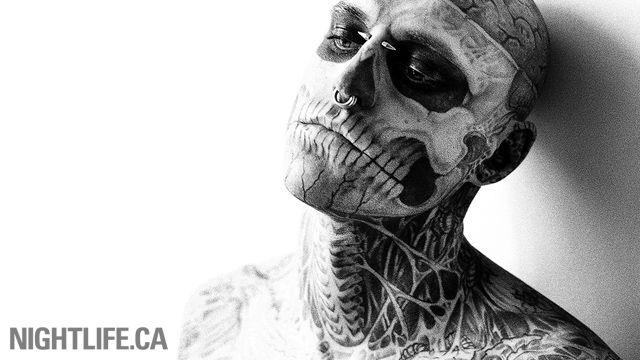 Rules are for squares
What do you do in your show? “I do the whole zombie thing. Lots of fakir work, biting nails, blockhead, brain floss, because it’s gross. I put a lot of things in my nose. Geek work, like eating worms, brains, fish eggs. It’s kind of clowning as well. A zombie who goes through pain. It’s just a macabre show.”

On the matter of being unconventional, his openly conservative mother told the UK’s Daily Mail: “Rick will always be himself. He's very loving to his family and faithful to his friends. His grandparents love him very much, he has been to family weddings, everybody has always accepted him as himself.” On the topic of rules and real life, Rick adds: “Conventions are overrated. If everybody worked 9 to 5, there would be no nightclubs, there would be no people listening to Gaga. 9 to 5 is a guideline for people who can’t make their own rules.”

In Born this Way, Lady Gaga also praises open sexuality: “No matter gay, straight or bi; lesbian transgendered life” - you get the point, we’re all born this way. Again, Rico’s life and the book of pop music’s sexual ambiguity intertwine: when asked if he has a girlfriend or boyfriend, he keeps us wanting more. “Overrated” is his only answer on the matter of relationships. He smiles shyly, keeping things mysterious.

Rick Genest is a punk-rocker at heart: pop music and fashion are not his world. “I’m pretty open-minded. You can take the good and the bad in everything: music, sports, arts... even drugs!”, he says, laughing. He arrived on set sporting a long black coat and a studded cap. Under it, he wore a black suit that was too big for him. He didn’t seem to care much about the rack full of fitted neutral coloured clothes that the stylist had brought for the shoot.

He has kind words for Formichetti and Lady Gaga, even if he saw the latter no more than four times in total. “We were having laughs. After the show, we went out for a couple of drinks. For sure, it was real, it was cool. Good aura. Spiritual people.”

“Gaga is a machine. She’s a distraction, just like carnivals. It’s all to keep people entertained”, he adds, pensively.

Curating global culture
What has changed since Formichetti plucked you from the streets of Saint-Henri? “I’m trying to build my own company now that I have a little money to play with. I’m hiring people as we speak. Just playing by my own rules instead of somebody else’s is a dream come true.” Any downside? “Now people I don’t know come up to me to talk about Lady Gaga and ask me if that’s a real tattoo.” What do you answer? “I tell them no, it’s my little sister’s make-up. Or, no, that’s not me in the video, it’s my twin brother, we have the same tattoo. If you ask a stupid question, you get a stupid answer.”

One ingredient that has been overlooked in the creation of Rico The Zombie is the curatorial talent of Nicola Formichetti. As a stylist, his talent lies in gathering the right ideas to create strong and meaningful imagery – such as Lady Gaga coming out of an egg at the Grammys. In this hyper-connected world, where culture and spectacle are going more global and digital by the minute, Formichetti relentlessly brings together designs and people to entertain a generation that sees the world through a screen.

By inking our collective fear of death all over his body, Rick Genest is challenging our relationship with time and beauty. If he doesn’t think much about the future, he acknowledges that everyone has a past. About beauty, he adds: “I don’t know. There’s a lot of beauty.” Pointing to the other side of the street: “That rusted, dismantled bike that’s been tied to the pole all winter, that’s pretty cool. Beauty... it’s broken bicycles.”

Art, time, beauty... What’s the most important thing to you, Rico? “Keeping it real. Respecting your people. Your friends, your family. Those who are yours.” And Montreal? “Of course, I love Montreal. It taught me everything I know.” 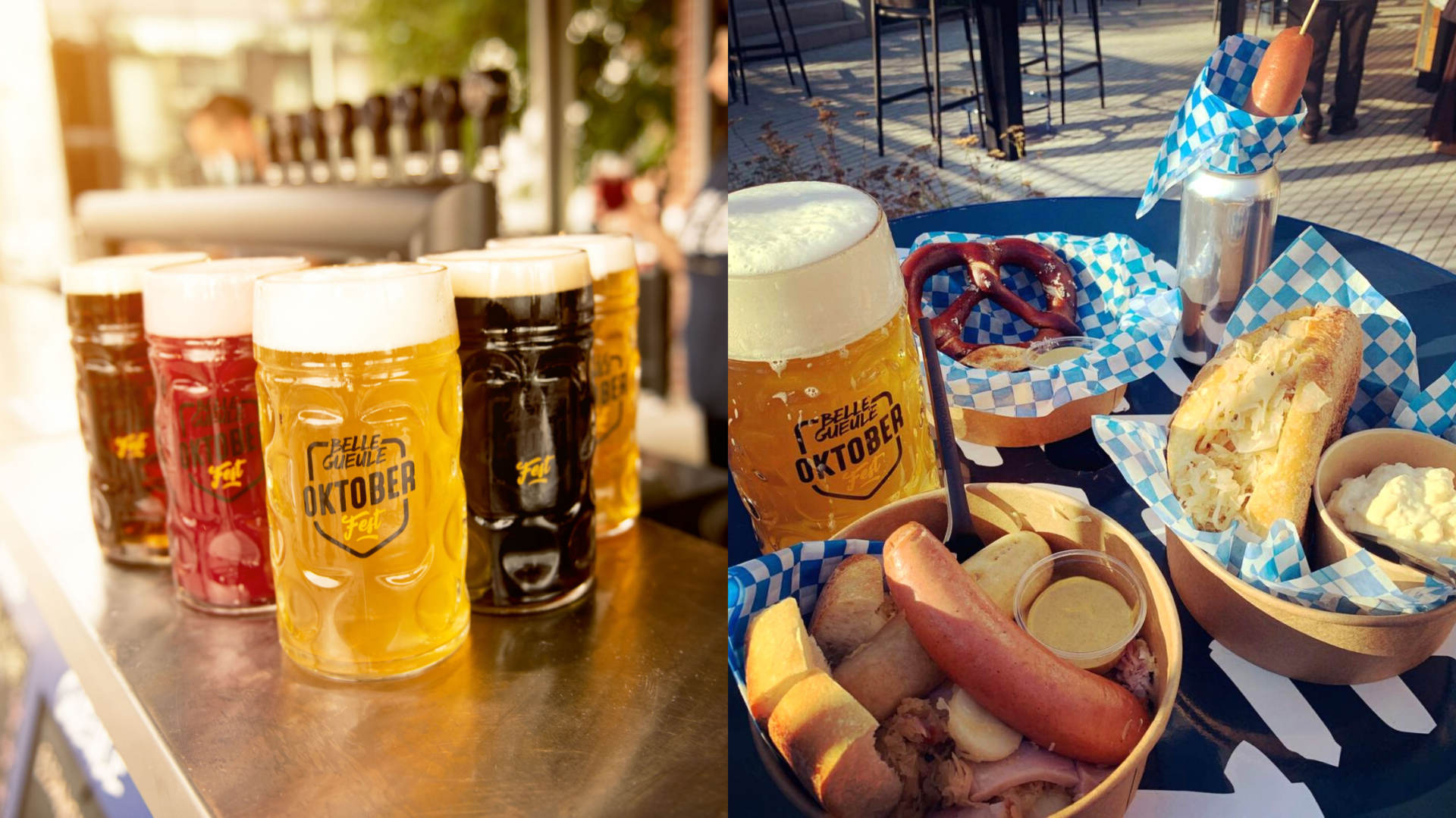 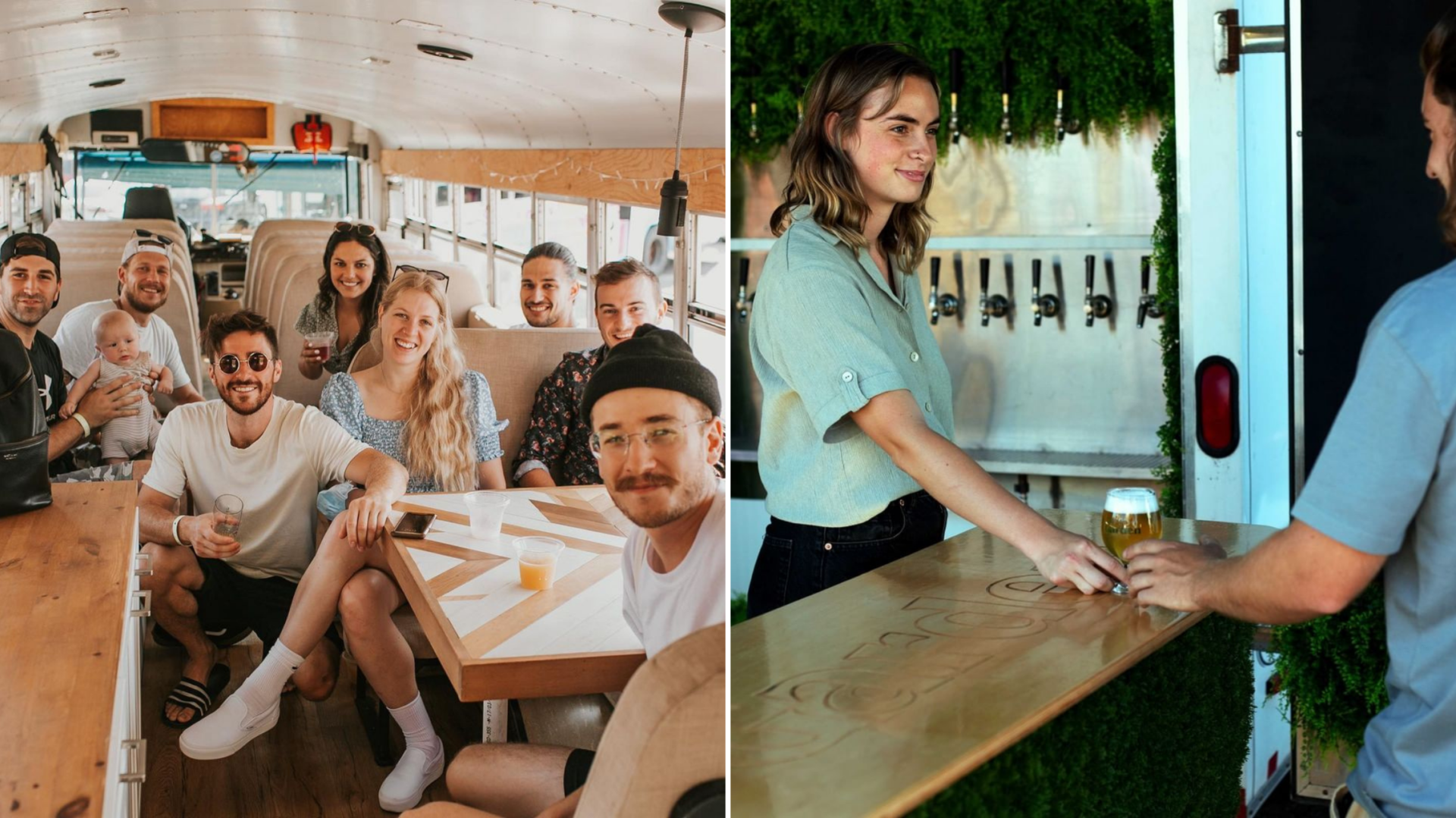